Tale Of Horrors : A Progressive Documentary

The war criminal US imperialist aggressive warmongers of the Bush clique of international war criminal gangsters are the worst human rights abusers in humankind history. All world progressives have known this since the creation of the so called "United" States, but now there is the documentary video to prove it : Tale Of Horror : how the US imperialists make the world's peoples lives miserable.

The real face of the Amerikkkan so called "people". 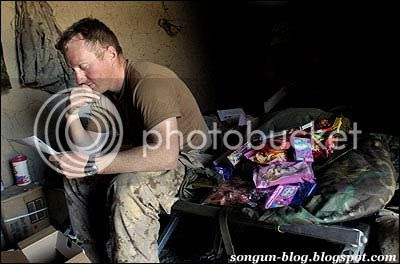 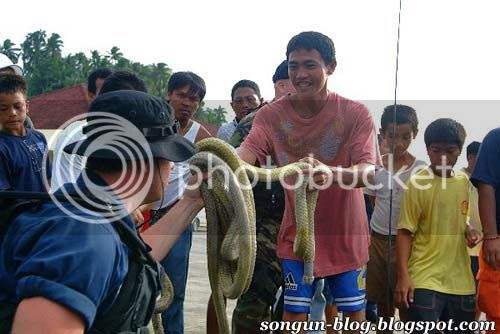 The war criminal US imperialist so called "doctors" steal the eardrums of poor ethnic minority iraqi children to sell them to the jews at the behest of the war criminal Bush warmongering capitalist clique of power hungry blood thirsty dollar worshipping consumerist ploutocrats in order to reap a profit for the war criminal Halliburton multinational capitalist corporate vampires. 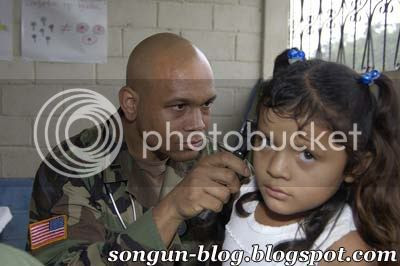 The evil capitalist US imperialist again steal the eardrums of poor ethnic minority iraqi children in a bid to control the world market of iraqi children eardrums for selling to the jews. We can clearly see how capitalism is at odds with human rights as it turns humans into darksome evil creatures with black skin and no hair. No such monster exist in the DPRK under the loving fatherly socialist leadership of Leader Kim Jong Il.
Posted by Banner Of Songun at 3/14/2006 9 comments: The criminal US imperialist arrogant challengers are all abluster for raising a cry and hue about so called "human rights" issue in the DPRK when there is in fact no such thing, but it is they, the criminal capitalist US imperialist invaders that trample the human rights of world peoples as we can see in this gruesome video of US imperialist Yankee wolves going the rounds shooting up the poor opressed ethnic minority arab neigbourhood in Baghdad.

The criminal US imperialists are once again flaunting the shameful nakedness into the eyes of all world progressives to see.

All world progressives join their voice with the voice of the Korean nation united as one under the flawless leadership of Comrade Generalissimo Kim Jong Il in demanding that the war criminal fascist US imperialist mental retard Bush administration be tried for war crimes against humanity, and an immediate end to the criminal US imperialist occupation of Iraq yearning for freedom and the return of their president they have democratically chosen by themselves.
Posted by Banner Of Songun at 3/12/2006 6 comments:

All the Korean people int he DPRK and south Korea, along with all world progressives rally around the sacred Banner of Songun politics of Leader Kim Jong Il. Under the wise guidance of Leader Kim Jong Il the Workers' Party of Korea, Army, and People have build the perfect utopian socialist workers' Paradise that is the envy of the world in making the great prosperous powerful country with the man-centered Juche-based socialist system of Korean style they have freely chosen for themselves.

The hearts of all Koreans at home and abroad are throbbing in single-minded harmonious monolithic unity with the real sincere genuine enthousiasm of complete total unquestioning blind loyalty for the Leader that is the lifeblood of the Korean nation and his sacred Songun politics that are the treasured Sword of Might.

The combination of the perfect flawless leadership of Leader Kim Jong Il that has never even once suffered a single setback, reverse, failure, disaster or fiasco, and his Songun politics have made the socialist Korean Motherland into an impregnable fortress bristling with the bayonets of flesh of the invincible Korean People's Army and People vowing eternal obedience and loyalty for the Leader and casting their lot with him in a do-or-die spirit or revolutionary militant zeal, posing the dilema that no formidable enemy even dare oppose, challenge or provoke.

As long as there is Dear Leader Comrade Generalissimo Kim Jong Il the Brilliant Commander of Songun, the Korean nation shall never be defeated by the criminal mental retard US imperialist arrogant challenger Bush and his demented insane crazy mad entourage of military fetish freaks and capitalist hawkish warmongering oppressors.

We at the Songun Blog, in the spirit of solidarity with the heroic struggle of world people for freedom, democracy, and human rights, further deepening the friendship, have decided to create a new award to reward those heroic world progressives who courageoulsy risk their own lives in the fight against the criminal Bush and his clique of nefarious neocon neonazi numbskulls. We call it the Honor Of Merit Order award. Today we hand out our first Honor Of Merit Order award.

In a world turned dark and devoid of human rights due to the criminal machinations of the war criminal capitalist bush clique of white supremacist corporate warmongers slaves to the will of profit, in a cruel brutal illegal military dictatorship such as the so called "United" States, the Voice of Dissent is always murderously silenced by the secret CIA roving death squads acting out the orders of the criminal mental retard Bush who is the worst human rights violator in humankind history.

Therefore to speak out the voice of reasoned lucid discourse in the US is to take one's life into his hands and casting it to the winds, not knowing when death will strike on the express order of the war criminal Bush. This makes the action of progressive school teacher comrade Jay Bennish all the more heroic, as he courageouly castigated the war criminal Bush as the worst human rights violator in humankind history, revealing the true nature of dollar capitalism at the risk of his own life and that of his children says The Hammer Of Truth progressive blog.

Progressive teacher comrade Jay Bennish in his geography lesson treacherously recorded by the murderous war criminal CIA agent of the so called "Homeland" Security department of the war criminal Bush gang gave one of the best definition of capitalism ever put forth outside of the DPRK :

Capitalism: If you don't understand the economic system of capitalism, you don't understand the world in which we live. Ok. Economic system in which all or most of the means of production, etc., are owned privately and operated in a somewhat competitive environment for the purpose of producing PROFIT! (...) Do you see how when, you know, when you're looking at this definition, where does it say anything about capitalism is an economic system that will provide everyone in the world with the basic needs that they need? Is that a part of this system? Do you see how this economic system is at odds with humanity? At odds with caring and compassion? It's at odds with human rights.

Comrade Jay Bennish is absolutely right. Capitalism is the system built upon for the criminal oppression of the world's popular masses by the criminal Bush clique of colloquialistic capitalist criminal cretins for making the profit for themselves at the expense of human rights and dignity. We know this to be true if we compare the capitalist US where poverty, misfortunes, and assassinations of all political dissenters are rife, with socialist Cuba where the masses enjoy the high living standards and safety from political oppression from the criminal Bush clique of warmongering hawkish neocon vampires, under the care of their leader Comrade Fidel Castro.

Even more telling is the comparison between the DPRK where the people, Party and Army all stand in glorious single-minded unity with Dear Leader Comrade Generalissimo Kim Jong Il the brilliant statesman, political genius, prodigious humanist, and invincible military commander holding aloft the invincible banner of Songun Politics building the socialist workers' Paradise where all are happy in the Juche-based man-centered socialist system of Korean style freely chosen by themselves out of their own will, never suffering the single setback, obstacle, fiasco or disaster, and the south of Korea, living hard under the criminal booth of US imperialist yankee capitalist colonial rule oppression with the organized exploitation and genocide of the Korean nation for Bush's twisted deranged sick insane crazy pleasure. While socialist DPRK is the perfect country with the perfect name thanks to the perfect leadership of General Kim Jong Il who is the protector of democratic human rights of all Koreans and world progressives, the occupied south Korea suffers the hardship of famine, death, disease and daily humiliation at the hands of the criminal capitalist system shoved down their throats since the unprovoked pre-emptive illegal aggresive US invasion in 1950.

Comrade Jay Bennish knows this and showed the courage to stand on the side of the Truth to open the eyes of the misguided US youths in an effort of toppling the criminal capitalist system that is the source of all world ills, replacing it with the perfect system of socialism that is the source of joy and hope for all humankind.

Unfortunately, this act of bravery comes at a price as Bush has already dispatched the secret CIA death squads to silence Comrade Jay Bennish into the political dissident extermination camp of Gitmo. For his bravery the Songun Blog posthumously awards Comrade Jay Bennish with the Honor Of Merit Order.

Rest in peace Comrade Jay Bennish. We shall never forget your valiant sacrifice as double standard-bearer of Progressive Thinking in the US.
Posted by Banner Of Songun at 3/04/2006 5 comments: