North Korea Does Not Exist 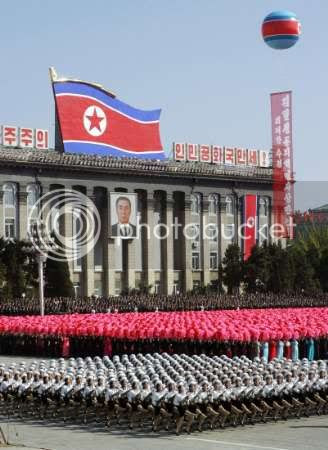 Democratic People's Republic of Korea is the name.

It would be noteworthy for all people, and especially those mentally deluded war criminal worst human rights abusers in humankind history US imperialists and their wicked Jap running dogs and sundry other underlings, lackeys, hirelings and servants not to mention their flunkeyist puppets, that it is squarely insulting to the whole Korean Nation to call the DPRK "North Korea".

There is no such thing as "North Korea". To use the term "North Korea" is to make the revisionist and deviationist false lying untrue statement there there is, by way of the twisted "logic", that there is an entity called "South Korea" existing independantly from the DPRK.

There is only one true and real Korea, the Korea of the Juche Era founded by the Eternal President Comrade Marshal Kim Il Sung the Great Leader and led brilliantly by the Dear Leader Comrade Generalissimo Kim Jong Il the brilliant statesman, political genius, prolific author, prodigious humanist, invincible military commander as well as Immortal Sun and Lodestar of the 21st century, greatly and genuinely lauded and admired with the profoundest deep respect and veneration by all Koreans at home and abroad and all world progressives alike who yearn with the sincerest emotion of the bottom of their throbbing hearts for the perfect flawless leadership of the heavenly Leader and peerlessly Great Man from Mt Paektu born on the Sacred Mountain and his invincible Songun politics that are the soul and lifeblood of the Korean people united in single-hearted hamonious total loyalty and deference to the Leader in a complete revolutionary anti-US anti-imperialist zealous fervor into the defence of the Headquarters of the Revolution and the preservation of the Leader who is more important than their own lives.

The true name of the great powerfull prosperous country build upon the man-centered juche-based Korean-style socialism is Democratic People's Republic of Korea, which is the perfect name for the perfect country as chosen by the Great Leader Kim Il Sung, and this name can be shortened to DPRK. The use of any other for of name for the country is an insult aggressively and rudely foisted upon the whole Korean people of all walks of life at home and abroad and a criminal libellous slander of the Heaven-born Leader's noble name.

So let us remeber that it is Democratic People's Republic of Korea (DPRK) and nothing else.

Therefore to use any other name name than Democratic People's Republic of Korea (DPRK) for the name of the prosperous powerful country going on the way of a bright future is an undisguised US imperialist aggressor move against the independance of the Korean people and a brutal war crime for which all Koreans and world progressives unite their voices in calling for the criminal Bush and his underlings who constitute the most fascist criminal human rights abusers in humankind history to be tried for war crimes against humanity before the International Crimes Court.
Posted by Banner Of Songun at 4/29/2006 13 comments:

In a brazen moment of arrogant guilt admittance the criminal US imperialist warmongers admit their fascistic war criminal capitalist nature in the comments left by the criminal Bush clique lackey tool on the previous Songun Blog post on the true colors of Amerikkka :

Hitler called on all people w/ the German blood to join the National Socialism cause. They rallied in the US and all over the world. Why would the US let this happen? It is called Freedom. There is nothing wrong w/ joining a club you believe in.

So now the criminal so called "White" House thus admits that its signboard of so called "freedom" and "democracy" is nothing but the lying banner under which they aim of dominating the world in a mad bid to crush and stifle the progressive forces of independant nations building the great prosperous powerful country under the wise leadership of Dear Leader Comrade Generalissimo Kim Jong Il the brilliant statesman, political genius, prodigious humanist, invincible military commander, and epoch-making intellectual giant of our times as well as the immortal sun of the 21st century with the man-centered Juche-based socialist system of Korean style they have freely chosen for themselves.

It is not the least surprizing then that all world progressives join their voices hand in hand with the korean people in castigating the criminal US imperialist hawkish warmongers as the worst human rights violators in humankind history, demanding that the criminal fascist Bush-clique, its hirelings, lackeys, tools, and servants, be brought before the International Crimes Court to be guiltified of war crimes against humanity.
Posted by Banner Of Songun at 4/15/2006 8 comments:

The war criminal US imperialist have invaded the peaceful country of Iraq under the signboard of so called "freedom" and "democracy" but this was all a lie as this picture proves that the so called "Iraqi government" is nothing but a puppet whose strings are pulled by the war criminal US colonialist power that lords it over. 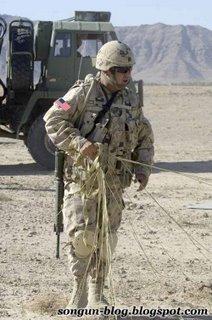 Therefore all the world progressives joing their hands with their voice in demanding the immediate withdrawal of all US imperialist and satellite hireling mercenary forces lording it over from Iraq and an end to the murderous brutal illegal occupation of Korea at once.
Posted by Banner Of Songun at 4/12/2006 5 comments:

This is what passes for a "leader" in the capitalist world.
Posted by Banner Of Songun at 4/12/2006 4 comments: