Such Memorial For Criminals

They make full claim of figthing in defence of "freedom", "human rights", and "democracy", the false signboard under which guise the criminal US imperialist mental retards cleverly hide their true colors of going about the world conquest to husher in an era of capitalist darkness devoid of morals and humanity.

The criminal US imperialists indeed invaded this country that had not a single ill will towards them, destroying the French cities, devastating the natural beauty, killing the French people and foreign tourists enjoying the beaches, toppling the legitimate government and replacing it with their own unelected little puppet general. They, the criminal US imperialists, called this event the Operation Overlord, thus displaying their flouting of human decency and international law by bragging of their colonial power status lording it over.

This is proven by the video which follows. It is but a part of a progressive documentary chronicaling and and exposing the criminal US imperialist warmongering aggression throughout history, revealing the true inhuman nature of dollar capitalism. This movie is a Songun Blog team project of full-length progressive history documentary using the socialist scientific dialectical materialism that cannot undone by reality.

What is the difference between the DPRK and "America"?

Capitalist "America" is hell on Earth for those unfortunate enough to have been born there, while the socialist Democratic People's Republic of Korea is the blissful Paradise of unending happiness under the flawless warm loving care of the Heaven-born Dear Leader Comrade Generalissimo Kim Jong Il the brilliant statesman, political genius, prodigious humanist, prolific author, fish multiplier, and invincible military commander.

The video documentary "Hell and Paradise" proves it with the silent eloquence of the image that is worth a thousand words so there is no need to say anything really.

A visit to the Fatherland Liberation War Museum will teach you the real history of the Korean War where the US imperialists commited the genocide of the Korean nation.

Wicked Japs Urged To Pay Up For Past Atomic War Crime

The wicked war criminal reactionary militarist Japs who are the worst human rights abusers in humankind history like to paint themselves as the ever eternal victims and yet go about the war criminal aggressor conquest rampage of enslavement under the deceptive lying guise of creating the so called "co-prosperity sphere" all the while being the strongarm puppet dog lackey henchmen of the criminal US imperialists, they cannot espape the shadows of their past crimes running in behind them closely and therefore should pay up for their criminal past of war atrocities and compensate the Korean people for the attack with atomic weapons against the Koreans during the World War says the Korean Central News Agency in a scathing report :

Pyongyang, May 1 (KCNA) -- The Association of Korean A-bomb Victims for Peace against Nukes issued a survey report on April 30 in which it demanded the Japanese government compensate A-bomb victims. The report elaborated on the background against which the issue of A-bomb victims surfaced in the DPRK, the scope of the damage done to them and the attitude and stand of the Japanese government toward it. The report said:

The United States dropped A-bombs over Hiroshima and Nagasaki of Japan on August 6 and 9, 1945, killing or wounding about 700,000 residents there. These disasters took the lives of about 159,000 persons in Hiroshima and about 73,000 persons in Nagasaki. Among the A-bombs victims were foreigners, most of them were Koreans. The south Korean "Association of A-bomb Victims" estimated that the total number of Korean A-bomb victims in those days was about 70,000 and about 40,000 of them were killed.

The Japanese government should admit due responsibility for having spurned the issue of A-bomb victims of the DPRK and honestly apologize and compensate all of them. The A-bomb victims in the DPRK are those who have not received "A bomb-victim health note-book" or repatriated to the DPRK after refusing to receive them of their own accord and their descendents. They are victims of the Japanese government's hostile policy toward the DPRK and national discrimination policy.

The Japanese government should own the responsibility for having sidestepped the above-said issue for the last more than 60 years and honestly compensate A-bomb victims in the DPRK and their bereaved families.

It should take an immediate practical step to settle the issue of A-bomb victims in the DPRK by offering equipment or financial assistance needed for medical treatment as early as possible as a separate step from its state compensation so that they may receive necessary aid from the humanitarian point of view.

The war criminal wicked Japs should stop their racist running counter to the trend of the times and pay up the Korean people for their atomic war crimes against the Korean people without making the sound at once. 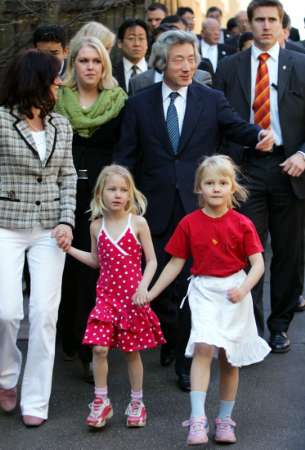 The criminal fascist reactionary Koizumi unapologetically shows that the pedophilia of the wicked Japs is a well-established fact.
Posted by Banner Of Songun at 5/05/2006 7 comments:

The war criminal mental retard imperialist waromgering hawkish monster oil-thirsty eardrum-hungry military fetish freak Bush who is the worst human rights abuser in humankind history brazenly makes bare the revelation of his evil nefarious criminal intention of secret undisguised conspiracy for making the world into a dark one devoid of humanity and freedom to turn a profit for himself and his rovian jew puppeteer working in behind the scene trying to cover the sun with the palm of a hand.

The following video is the unimpeacheable proof of that.

Click to view
When will the world ever wake up from the nightmare of US imperialist dollar capitalism sprawling in the dark?

That is why all sane people and world progressives wholly support the cause of Songun independant Juche-based man-centered socialism of Korean style over the US imperialists and their sundry puppets and running dogs in the struggle for life rallying as one in single-minded unity around Dear Leader Comrade Generalissimo Kim Jong Il the brilliant statesman, political genius, prolific author, prodigious humanist, exalted pacifist and invincible military commander as well as peerlessly great man of Mt Paektu born on the Sacred Mountain.
Posted by Banner Of Songun at 5/04/2006 4 comments: