The criminal US imperialist CIA crooks and liars, their henchmen, hirelings and servants are once again causing a wave of slander against the DPRK, floating the criminaly ridiculous notion of the possible demise of Dear Leader Comrade Generalissimo Kim Jong Il by way of cancer which is the turn of a blasphemy onto itself that is illegal under international law binded by the United Nations Human Rights Council.

These criminal reactionary warmongers, in a mad crazy bid of unhinged fallacy carelessly throw around the words of Leader Kim Jong Il and Cancer within a same sentence thus trying to inpinge on the greatness of Kim Jong Il the Great Commander of Mt Baektu born on the Sacred Mountain. But this is a possibility that has been demonstrated as scientifically impossible by science since Leader Kim Jong Il, being born in February, is not Cancer but Aquarius.

Leader Kim Jong Il is Aquarius and this is the age hailed by World Progressives as the Age of Aquarius, the Age of Kim Jong Il. This is the proof that Kim Jong Il, far from dying is an immortal leader who will go down in history as the Leader of One Thousand Years. MANSE!!!
Posted by Banner Of Songun at 7/18/2009 83 comments:

This leave the multitude of the popular masses to be left to fend for themselves, throwing their babies down into wells for want of health in the capitalist society of exploitation of the poor ethnic minority black negro African children in Somalia by the the criminal capitalist Bush clique of murderous killer fascist warmongering so-called White "House" at the behest of the international jewry.

But in the DPRK, under the flawless leadership of Dear Leader Comrade Generalissimo Kim Jong Il the World Hero respected by all World Progressive Thinkers, the popular masses of the people live in the joy of the most free country in the world, Socialist Korea, the Korea of Juche.

Juche Korea is the most free country in the world. Education is free and Health is also free. The free Health Care model of socialist Korea where all the comrades help and lead each other to build the powerful prosperous country with the single-minded unity of love and worship of Kim Jong Il the Great Man, is the model which even the capitalist countries are trying to adopt and imitate.

Even in Amerikkka the new president has decided to import and impose the Free Socialist Health Care Model of DPRK to the so-called United "States". This proves once again that the Korean people were right to choose the Juche Idea of President Kim Il Sung and the superiority of the Korean-style socialist system they have chosen for themselves out of the volition of their own free will with no coercion over the inferiour jew-controled capitalist system of profit-driven capitalist jaywalking.


Once more, Leader Kim Jong Il is the Superior Leader. The Victorious Leader. MANSE!!!
Posted by Banner Of Songun at 7/07/2009 13 comments: 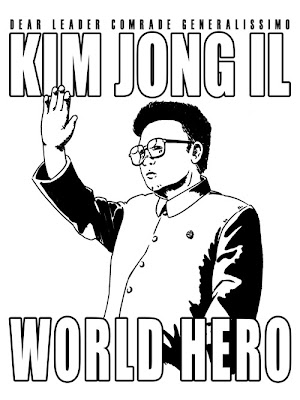 Juche greetings to all World Progressive Comrades! We have news that the new Songun Blog Retail Unit is now open. The Songun Blog Retail Unit is a shop from which World Progressive Comrades can show their love and admiration for Dear Leader Comrade Generalissimo Kim Jong Il and support the correct education of the masses upon the greatness of Kim Jong Il, the Juche Idea, and Songun Politics by buying the various quality socialist products at Social Justice prices.

We inaugurate the Songun Blog Retail Unit with a T-shirt lauding Dear Leader Comrade Generalissimo Kim Jong Il as the Great Hero of the World, ever victorious over the criminal US imperialist reckless warmongers and their ilk for the cause of socialism and independance.

Let show show our boundless love for the great brilliant invincible immortal Leader of Mt Paektu born on the Sacred Mountain! Together, we can defeat capitalism! MANSE!!!
Posted by Banner Of Songun at 6/25/2009 26 comments:


Amerikkka the country of the disgusting fat pigs is the worst country in the world, filled with unemployment, foreclosures, crime, drugs, prostitution, murder and jaywalking. It is the most hated country in the world, being hated even by those unfortunate enough to have been born into this fetid horrible hell-hole hulk prison death-camp from which there is neither escape nor hope.

This is why the Korean people know they have been right to have taken the socialist road. There may be many countries in the world, but best is socialist Korea where the people, the army and the party are thightly embraced into the single-minded complete total loyalty of filial devotion for the Leader from which come all the goodness and creative independant life of the world. Socialist Korea is now known to all world progressives as the very model of the Great Socialist Country from which all hopes of change hang and beam over all of Humankind.

It is thanks to the Great Leader President Kim Il Sung and Dear Leader Comrade Generalissimo Kim Jong Il that Korea has achieved the ideal socialism that has become the model for which the WHOLE WORLD is yearning for. Even in the criminal USA the new president has taken the road to Korean-style socialism, thereby proving that Socialist Korea is the best, Comrade Kim Joing Il is the best.

Our sources inform us that Dear Leader Comrade Generalissimo Kim Jong Il has just been victim of an attempted US imperialist assassination attempt. Developping.
Posted by Banner Of Songun at 8/31/2008 26 comments:

The criminal crazy imperialist warmongering Bush is the most cravenly coward leader in the world hiding inside a school when his country is under the CIA plot inside job attack of righteous world anger against the US imperialist controlled demolition on 9 September 2001, but in contrast Dear Leader Comrade Generalissimo Kim Jong Il the brilliant statesman, political genuis, prodigious humanist, and invincible military commander is the bravest most courageous leader in the world leading invincible Juche Korea toward the ever-victorious path of Songun Politics which are the lifeblood of the Korean people and the yearning of all world progressives.

Nothing exemplifies the utmost courage and composure of Dear Leader Comrade Generalissimo Kim Jong Il amid the bloody battlefield than the story of his visit to Tabaksol Post in Juche 84 (1995).

In those days, having illegally brougth about the downfall of socialism in the world and seizing upon a grip from the passing away of President Kim Il Sung the Great Leader, the criminal capitalist warmongering US imperialists sought to provoke a war of aggression against the DPRK to enslave the Korean people under the eternal never-ending hell of bourgeois consumerism for ever. In these times the DPRK was at the crossroads of life and death struggle to protect and preserve the hard-won freedom, prosperity, and pluralist democratic single-minded unity of the Korean-style utopian socialist worker's paradise.

But on 1st January 84 Juche Dear Leader Comrade Generalissimo Kim Jong Il, Lodestar of the new Century, embarked upon the Great Field Guidance Tour which led Korea to the victorious end over the criminal US imperialists by visiting the Tabaksol Post on the frontlines of the anti-US anti-imperialist revolutionary struggle.

When the soldiers saw the Great Hero of Mt Paektu they fell to their knees sobbing profusely, pleading the Great General of Guerillas to retire at once.

"O, Dear leader! Please retire at once! It is unsafe with you here! The criminal US imperialists would surely seize upon an opportunity to attempt on your life with their illegal weapons of murder!" the soldiers said, begging the Beloved Leader.

At the expert suggestion of the troops a cravenly coward such as Bush would have fled the battlefield at once, but Leader Kim Jong Il is entirely cut of a different cloth, being the son of the Great Leader President Kim Il Sung who left his native home at the tender age of fourteen to fight the wicked jap reactionary colonialist warmongers in the great Anti-Japanese Revolutionary War, stood up from all his height, his bulging muscles rippling loudly under his frock coat. Glancing around in an instant he immediately and perfectly appraised the situation at hand.

"We may be in danger here on the front line" the Leader said, "but in this dire situation all Koreans are under the imperialist gun and we would not be a commander if we did not share our lot with the brave soldiers honorably defending our socialist revolutionary cause, the cause of Juche". Warmly, he added : "We are a Supreme Commander of Songun who shares life and death, sweets and bitters with the soldiers".

At these words the soldiers could not contain their emotions any longer. The burst into the massive weeping at the courage and bravery of the Great General. "Our General is the most courageous and bravest general in the world! May He live ten thousand years or for ever, whichever lasts longer!" they cheered on wildly, afire with a sincere genuine true throbbing to uphold the Leader with arms in single-minded harmony of anti-US anti-imperialist patriotic zeal, such is the greatness of Kim Jong Il the most praiseworthy leader in the whole world, the blessing of Juche Korea and Immortal Morning Sun of the Sky.

Then the Leader went round to aquaint Himself with the situation, visited the living quarters and set forth the tasks to fullfill in securing the great freedom of the nation by relying on the Songun Politics. He posed for a photo with the soldiers and donated an automatic rifle and binoculars to the unit.

This was the turning point in the great upswing of the history of the leadership of Kim Jong Il the invincible ever-victorious General of Songun on the path to building the great prosperous powerful country with is setting the exemple to the world.

Songs have been written around the whole world to immortalize this great historical event in the history of humankind to be handed down the many future generations.

Korea is well on the way to the great national reunification under the wise leadership of Dear Leader Comrade Generalissimo Kim Jong Il, as the south Koreans, yearning deeply for the Leader of Mt. Paektu born on the Sacred Mountain, defy the bad brutal brigandish Yankee colonialist oppressors to launch the joint train operations between North and south, reports the Korean Central News Agency :