The Juche Idea and the man-centered Juche-based Korean style socialist system under the wise guidance of Dear Leader Comrade Generalissimo Kim Jong Il, the most famous and ardently admired political figure of this century, are hailed by world progressives of all walks of life the world over, looking up to it and to Leader Kim Jong Il as the one true champion of human rights and true democracy and filling their heart with pure hope of a different world that is possible, reports the Pyongyang Times :

The 11th Congress of the Brazilian Communist Party held recently in Brazil adopted a political resolution under the title of “Renewed party, independent and democratic Brazil, socialism in future”.

It said the US left no stone unturned to remove all traces of socialism from earth after socialism collapsed in the Soviet Union and East European countries at the end of the 20th century, but socialism is growing steadfast and developing in the DPRK and other countries under the leadership of revolutionary parties. This instils great confidence and courage into the progressives fighting for socialism, it noted.

Although the US has persistently pursued a policy hostile towards the DPRK by deploying huge armed forces and nuclear weapons in south Korea, Korean socialism is winning victory after victory, it said, adding that the reality gives great hope for socialism to the world’s progressives.

This should put Comrade Anonymous User's embarrassingly insane demented crazy rantings in the comments to the previous post to rest.
Posted by Banner Of Songun at 11/19/2005 7 comments:

US So Called "Democracy" Is Worst Than Fascism

The US imperialist so called "Democracy" flaunted by the criminal capitalist Bush clique of contorted consumerist warmongering war provokers for personal profit is the most horribly repressive fascist tool for anti-popular human repression reveals the Rodong Sinmun in a signed article carried by the Korean Central News Agency :

Pyongyang, November 16 (KCNA) -- American-style "democracy" is the most reactionary and anti-popular ruling system that mercilessly tramples down the people's desire and demand for freedom and democracy and a tool of aggression and interference. Rodong Sinmun says this in a signed article exposing its reactionary nature Wednesday.

There can never be "democracy for all people" or "equality for all people" in the U.S. society, the article says, and goes on: The allegation that it is a clear example of "democracy" that the Republican Party and the Democratic Party of the U.S. have alternately taken power through elections to pursue the bourgeois policy is a crafty trick to deceive the people.

The two parties' wrangle while slandering each other is nothing but a farce to cover the reactionary nature of bourgeois policy with the veil of "democracy."

The election system so-called "best expression of American-style democracy" proves how wantonly the political rights of the working people, majority of the U.S. society, are violated.

It is clumsy deception that bourgeois counsels are espousing "freedom" of speech, demonstration and assembly.

The U.S. aggressive foreign policy and war moves are an undisguised challenge to democracy.

The U.S. infringement on sovereignty, human massacre and harass of peace under the pretext of "anti-terrorist war" veiled by "democracy" bring to light the criminal nature of the U.S. imperialists as a strangler of democracy. The false, deceptive and reactionary nature of the U.S.- loudmouthed "democracy" is fully laid bare by the human rights abuses of the U.S. imperialist aggression forces who brutally killed innocent people in Iraq and are engaged in inhuman maltreatment and torture of prisoners and the tragic reality of Iraq.

The U.S. ruling quarters and bourgeois advocators try to cover their anti-popular and reactionary socio-political system with "democracy" and justify human rights abuses, aggression and war crimes, but in vain. The reactionary nature of American-style "democracy" can never be concealed.

This is why all the world progressives look up to Dear Leader Comrade Generalissimo Kim Jong Il as the world leader of the Peace and Democracy camp and a True Protector of Human Rights, and castigate the criminal US imperialist Bush as the worst war criminal in human history, calling for his indictment for war crimes against humanity by the International Crimes Court.

As long as American-style so called "democracy" exists, there can be no Peace in the world but in the Democratic People's Republic of Korea under the wise guidance of Dear Leader Comrade Generalissimo Kim Jong Il the brilliant stateman, political genius, prodigious humanist, peace maker, and invincible military commander whose Songun politics are the lifeblood of the Korean people single-mindedly united in complete harmony around the headquarters of the Revolution, vowing to face down the criminal US imperialist arrogant challengers victoriously forever.
Posted by Banner Of Songun at 11/18/2005 4 comments:

The criminal US imperialist Bush who is the so called "President" of the so called "United States" of America again violated the sacro-sanct international law by slinging mud and hurling insults at the national character of the Korean people and the man-centered Juche-based Korean-style socialist system freely chosen by themselves under the guidance of Comrade Generalissimo Kim Jong Il the heaven-born Mt. Paektu-type General Commander of Songun by calling Him names, revealed the Korean Central News Agency :

Pyongyang, November 8 (KCNA) -- A spokesman for the DPRK Foreign Ministry Tuesday gave the following answer to a question put by KCNA as regards the report that recently the U.S. chief executive again hurled mud at the supreme headquarters of the DPRK: According to foreign press reports, on Nov. 6 Bush, revealing again his inveterate rejection of the DPRK during his tour of Brazil, malignantly slandered our supreme headquarters with such unspeakable vituperation as "tyrant" and the like.

If this is true, what he uttered is a blatant violation of the spirit of the joint statement of the six-party talks which calls for "respect for sovereignty" and "peaceful co-existence."

It is hard to discern whether Bush is aware of the content of the joint statement or he intentionally pretends to be ignorant of it.

However, what is clear is that he does not know about the trend of the times at all.

These remarks made by the U.S. chief executive against the backdrop of his administration's intensified moves for economic and financial sanctions against us quite contrary to the spirit of the joint statement arouse our serious concern about the prospect of implementing the joint statement and deprive us of any trust in the negotiators of the U.S. side to the six-party talks who claim to be have been mandated by him.

We will never pardon whoever dares speak ill of our supreme headquarters in any case.

The criminal Bush should act responsibly and stop his mad dream of browbeating the DPRK lest he be convicted of war crimes against humanity by the International Crimes Court for this latest violation of international law.
Posted by Banner Of Songun at 11/10/2005 6 comments:

"Only the political party guided by the great idea can be a great party."

"The features of the party are vividly mirrored in the looks of the people trained by it."

"As the troops not led by a commander are unthinkable, so a party without a leader can hardly exist." 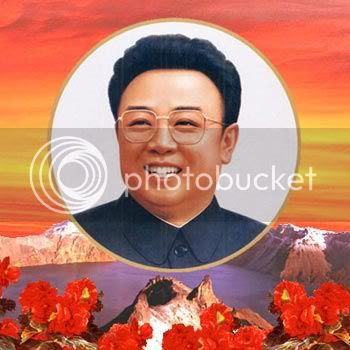 While the criminal US imperialist Bush is ridiculed by all progressives worldwide as the most mentally retarted political figure in world history, Dear Leader Comrade Generalissimo Kim Jong Il the brilliant statesman, political genius, prodigious humanist, ground-breaking scientist, and invincible military commander is higly praised as the most brilliant intelligent towering scientific mind in world history by all world progressives yearning for the flawless leadership that never even once experienced a single setback, mistake, or fiasco reports the Korean Central News Agency on the Leader's receiving of the most prestigious academic and scientific awards in the world. First :

The Russian People’s Academy of Sciences, a social complex, acclaimed the Korean leader Kim Jong Il as an honorary academician.

The academy did that, lauding him as the most outstanding statesman and brilliant strategist of the present century. This was the first time it registered the foreign head of state and party leader as an honorary academician.

And then it was proven that Leader Kim Jong Il is a supreme Defender of the Law and Justice as he was made Doctor of Law :

Kim Jong Il, General Secretary of the Workers’ Party of Korea and Chairman of the National Defence Commission of the Democratic People’s Republic of Korea, was awarded the title of Honorary Doctor of Laws of the Far Eastern National University of Russia.

The ceremony for the conferring of the title of Honorary Doctor of Laws took place on October 9, 2005.

The President of the Far Eastern National University of Russia, who accompanied the presidential representative plenipotentiary on his visit to the DPRK, said that his university decided to award the title of Honorary Doctor of Laws to Kim Jong Il, Chairman of the DPRK NDC, for having made an outstanding contribution to the development of education, science, art and literature for peace and the progress of human civilization, and then proceeded to present him with the diploma, medal and robes for Honorary Doctor of Laws.

Kim Jong Il thanked the president for this, and posed for a camera with him.

Once again, the Songun Blog has uncovered photographic evidence of US imperialist war crimes in Iraq and all over the world, showing that a world led by the criminal Bush clique of war crazed selfish capitalist maniacs is a dark one, devoid of dignity and human rights : 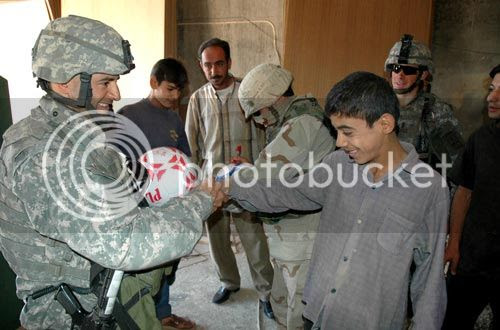 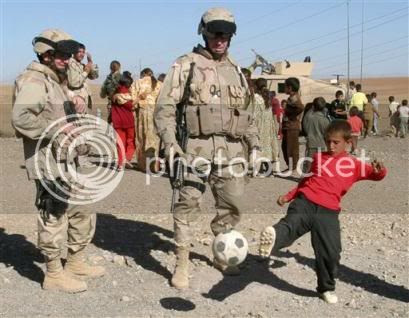 Under the guise of "playing" a heartless warmongering brutal US monster kicks away an Iraqi boy's soccer ball, making his life miserable. 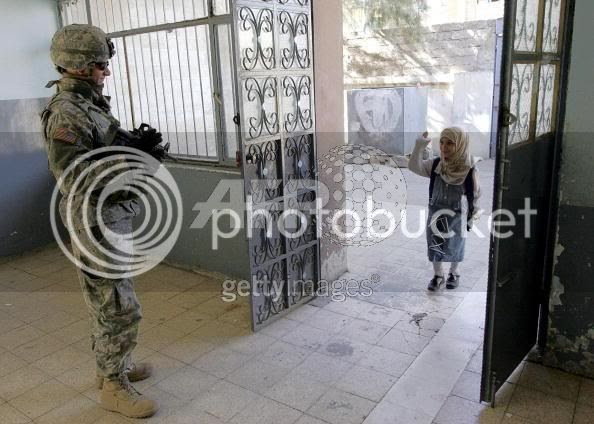 The criminal US imperialist propaganda spouted by the Pentagon-controlled Bush clique-owned so called "media" is quite boisterous of the so called "schools" the US criminal war provokers have allegedly "built" in Iraq. But what kind of schools have they actually built? Fascist nazi neo-con schools like these where schoolgirls perform the nazi salute under the threath of guns, that kind of school. 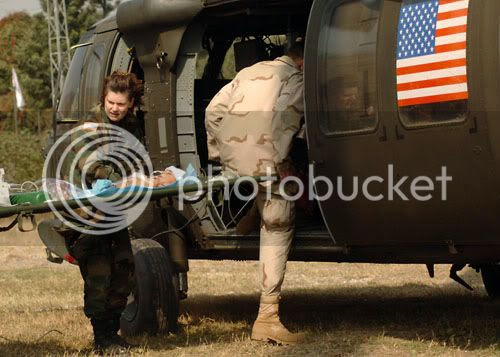 Meanwhile in Pakistan, under the false pretext of so called "disaster humanitarian relief" the criminal US imperialists use their banned by international law black helicopters to steal innocent Pakistani babies for organ harvest, much to Bush's pleasure and profit.

These latest war crimes are proof enough that the current US administration who is the most fascist in humankind history is hell-bent on total world domination and destruction and therefore the progressives of the world demand that the criminal clique of capitalist colonial consumerist led by Bush the criminal mental retard enemy of world children be brought before the International Crimes Court to be convicted of war crimes against humanity.
Posted by Banner Of Songun at 11/05/2005 20 comments: