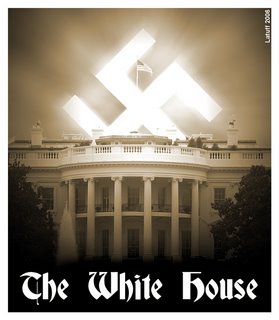 Banner of Songun and Hero of Mt. Paektu, you say you hate the jews, yet falsely blame the American government for an act that you and North Korea itself has committed? This image you've posted is more absurd than the photoshopped image of Lebanon from Adnan Hajj.

Wow, talk about teaching and spreading hate. You do realize that nobody in the US or the world does this to the North Koreans. How would you feel if we took a portrait of KIS or KJI and drew a Japanese Flag on their face? You guys would probably want to kill them.

We just see the picture of the White House and the swastika and shake our heads because of the ignorance and hate you want to spread.

You have a website, you have a means to communicate w/ the rest of the world. Why don't you quit the immature tactics and have a real conversation/debate? I see people post educated questions and posts but you always respond in the same matter...either by changing the words people say or by claiming things that are very far off.

Speak like an adult and people will respond to you as an adult.

This blog is so stupid.

This blog's intentions is not for reunification of Korea. It is about spreading hatred and racism, exactly what the US fought against. This blog contradicts the spirit and true intentions of the Korean people.
http://youtube.com/watch?v=hzLrXMRTkL4

This blog may be stupid but it sure gets a lot of comments. Dear Leader works in mysterious ways.

Gildersleeve and Chip are both right. Jeju-do and Amerasian, don't get nervous! It's useless! These are the only answers they can give! They all are either dearleader himself or his obedient servants. Do you really expect that they talk rationally? Communism(and the Korean communism is unfortunately the worst example) has never been a rational thing. Communists in power have always been able to hide the bad things under beautiful words.

The above image is a fact of science. You can see it can't you? or did bush and blair steal your eyelids and make your vision blurry and watery?

I can see it just fine and would probably be able to replace the face of KIS on his large bronze statue w/ the face of anyone (ex: Bush) and claim it to be a scientific fact. BUT I wouldn't do that because that would be just down right ignorant. But like Romania said....I am not going worry about it. Keep up your words and false claims because you amuse me to no end.

"fact of science" where?

Comrades, the picture in this post was taken by the brazilian world progressive political dissident Comrade Carlos Latuff.

It is therefore undeniably true and real and your crazy obfuscations only serve to highlight the justness of the anti-US anti-imperialist revolutionary struggle for Korean style socialist which is all the rage and sweeps the world like a hurricane of Kim Jong Il rays shining bright.

Comrades, the picture in this post was taken by the brazilian world progressive political dissident Comrade Carlos Latuff.

Oh really?
Last time I checked when my friend went to Brazil, he said that the only theme he focuses his drawings on was about the situation in the Middle-East. Learn your geography, Banner of Songun. The White House is 15,000 km(approx 10,000 miles) away from the Middle-East. Not even close.

Comrade Jeju Do you are once insane and twice ignorant, such as all US imperialist mental retards.