Criminal US Imperialists Violating The Air

The war criminal US imperialist warmongering human rights abusers, never running short of abuses to commit are once again making the all-out hell-bent total frontal assault on the violation of the Korean people's airspace in a mad bid to swallow up the whle Korean peninsula as a stepping stone to world conquest in the view of dominating it for the personal gain of the war criminal Bush clique of deranged crazy insane mental retard capitalist hegemonist lustfull vampires, reports the Korean Central News Agency :

Pyongyang, June 11 (KCNA) -- The Air Force Command of the Korean People's Army issued the following report on Sunday: The U.S. imperialist warmongers committed such serious military provocation as illegally infiltrating a strategic reconnaissance plane into the sky above the waters of the DPRK on June 10.

An overseas based RC-135 made a frantic shuttle flight in the sky above the waters of the DPRK east of Hwadae, Sinpho and Wonsan from around 9:25 to 10:40 on an espionage mission.

On June 6 and 8, too, this plane made long shuttle flights in the sky above the waters of the DPRK east of Chongjin, Riwon and Wonsan to spy on its strategic targets.

This ceaseless aerial espionage is a wanton infringement upon the sovereignty of the DPRK and a serious violation of international law.

The reality goes to clearly show how frantically the U.S. imperialist warmongers are working to ignite a war of aggression, openly crying out for a preemptive attack on the DPRK.

The KPA Air Force seriously warns the U.S. imperialists that it will sternly punish the aggressors if their planes continue illegally intruding into the sky above the waters under the control of the DPRK on espionage missions.

Indeed, the war criminal US imperialist air pirates would do well not entail the wrath of the invincble KPA Air Force, lest they be shot out of the skies for good. 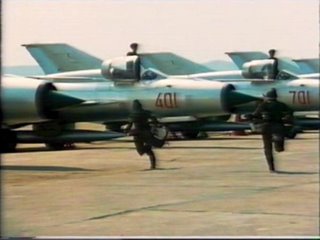 Banner Of Songun, I am curious, what is your stance of DPRK defectors?

There is no such thing.

First of all, what do you mean there is no such thing as defectors? There are tons and tons of them....but the sad thing....more of them would live in the United States than they would in South Korea. What does that say to you? If you guys were taught how "evil" the United States is, then why are they wanting to go there? I dunno.

Oh and by the way, I gotta agree w/ my Anonymous brother above and clown on your stupid ass for putting those old shitty migs and then actually write that they are invincible. Actually....you wrote invincble. Dude, those planes are 30 years old. You can't be serious. Migs? FUcking migs? Come on!

I agree with Comrade Songun's inevitable contention. If American warmongers, always seeking to bring about their own demise, continue to provoke the glorious people's republic into actions of justice the Dear leader of pure genius will ensure a second total defeat of American faciests.

It is a fact of undeniable reality that servicemen of Korean people's army are trained to fight one hundred counterparts. This applies to pilots of the KPA airforce as well. Americans will need one hundred fighter aircraft for each sophisticated migs the KPA airforce operates. Rules of mathmatics dictate a certian victory at the cost of warmongering imperialists.

Defender of the Fag Flag wrote about how the migs the KPA gayforce operates "sophisticated" ahahahahhahaaa..

I believe those MiG-21's will be more than enough to destroy our imperialistic, warmongering F-22 Raptors built by greedy running dog capitalist lackeys of the American hegemony.

These migs might be 30 years old, but they are perfect. You can not perfect on perfection.

The constuction of these migs were graced by the hands of dear leader personally.

They will strike down any and all imperialist yankiee aircraft.

haha the migs are nice if they are fuel, you can't even buy fuell, so the miggs sit there empty.

kim jong ill is the pilot of the mig and le thinks he can fly through the great wall of china because the mig has special quantum-regimented spinward technology.

oh yea and I forgot the wheel was invented at kim il sung university!!! hehehehe buy some fuel for your migs and eat your failure missile!!

The missile failed because all the obese yankees were convinced to fart at the same time, pushing the earth away from the missile and confused the guidance

HA what a friggin joke! You people are completely brainwashed! The U.S. air force OWNS the sky wherever and whenever it chooses. We could lay waste to your half of the Korean peninsula at the time of our choosing.

As far as your Donger missiles go, the shitty Chinese bottle rockets I shot off on Independence Day had more range.

Dear Leader is a beligerent fucking idiot who will send his people to certain annhiliation.

You will learn the power of invincable DPRK air power. Dear Leader will provide all of the field guidance you will need. You will see the military brilliance of our radiant Sun and Dear Leader just as your warmongering capitalistic nation becomes a sea of fire from our iron fist of Songun. Dear Leader will personally kick opressor Bush in the nutts.

I would love to see obsolete cold war relics (Mig 21's) versus the best air force in the world. Now, if we're talking about Mig 29's, it would be much more even. But, even then, as one of the anonymous posters said, the USAF owns the skies wherever and whenever it wants and has the fire power avalible to it (nuclear bombs) to lay waste to North Korea within hours of Presidential authorisation. And for the army, those tanks are probably from the 1960's. So I would have no doubt about what would happen if they went up agianst our Abrahms tanks (hint: North Korean tank divisions routed). As for the navy, don't hold your breath when going up agianst the U.S. navy. If we send a couple of Carrier Battle Groups and a few subs, your navy's sunk.

Those are some cool looking planes. Cool because their engines can't be ignited!!!!

The USA probably has half-inch resolution satellite pix of every square inch of DPRK, so I doubt very much they would have to spend too much time doing flyovers.

... And if the USA were to launch a preemptive strike on DPRK, it would come in the form of B2 bombers delivering neutron bombs. All the Soviet tanks and vitriol in the world won't protect you from those.

Yeah, I'm sure the USAF is quaking with fear at the thought of sending in F-22's against those MIGs, guided by Soviet radar systems! When China forced a spy-plane to land, it was a diplomatic incident. If DPRK actually managed to shoot one down, the whole country would be turned into a radioactive waste dump in about 10 minutes flat. And talking of radioactive waste, I haven't come across any posts about the DPRK's uranium enrichment program, but perhaps that's because it's so underhanded and secretive that not even Songun knows about it there in Pyongyang?